What are the benefits of Directional Drilling?

Directional drilling, also known as horizontal boring or directional boring, is an efficient method of repair and installation of water, sewer lines and underground services. It avoids trenching and can effectively solve sewer issues with minimal impact on the environment. By using a surface-launched drilling rig, directional drills are safer and more environmentally friendly than conventional drills.

This method is faster and less costly than digging a trench and replacing the line by hand. Digging a trench causes more damage to the surrounding ground and requires time to put it back together. Using a directional drilling machine is much faster and requires only a single pilot hole. As a result, you will save money and time with limited restoration work needed.

Choosing a qualified directional drilling contractor is critical. The right contractor can help ensure your project goes smoothly and safely. They will be able to provide you with the right services for your needs. And with so many options, you’ll have an easier time choosing the best one. Moreover, you can ask for references and get free estimates from reputable companies. There are several reasons to use a professional contractor, like Behm Enterprises, Inc..

How does Directional Drilling work?

Directional drilling is a trenchless method of pipeline installation. During the procedure, a pilot bore is drilled and then a reamer enlarges the bore to allow for pipe installation. The technique is safe and effective, and can be used for a variety of purposes. It is also used to install new piping in an existing property.

It is a trenchless method of pipe replacement that eliminates any visible disruption to the land. The directional drillers are able to work under rivers and a wide variety of other obstructions. Because of the limited visual impact of directional boring, directional drillers are highly efficient. With the right equipment, they can install and repair sewer lines efficiently and reduce operating costs. With this method, you can achieve high-quality installations, without interrupting the landscape or affecting the water supply.

This is a common method for pipe installation in commercial and industrial areas. It is a very effective technique in the placement and repair of sewer and water lines. It is also used for the repair and replacement of existing water mains. This technique has many benefits. It is safe and effective. To learn more about the benefits of directional drilling, contact the experts at Behm Enterprises, Inc.

We recently completed this sanitary sewer installation at Fairhaven School in Mundelein, IL. 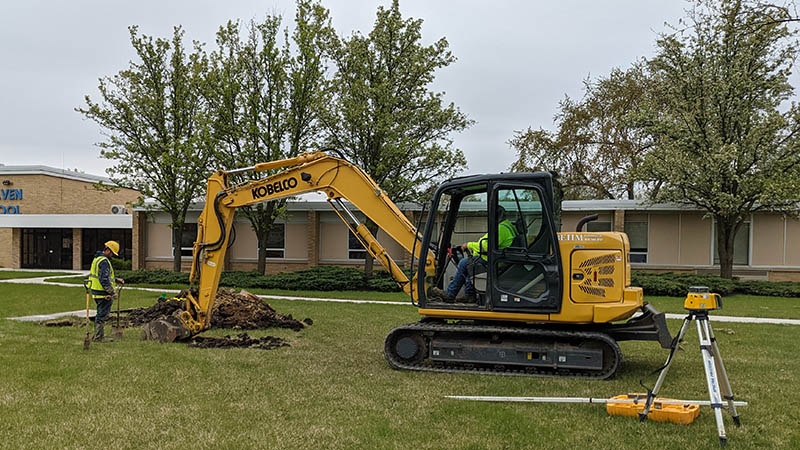 We recently replaced a fire hydrant in Lincolnshire. 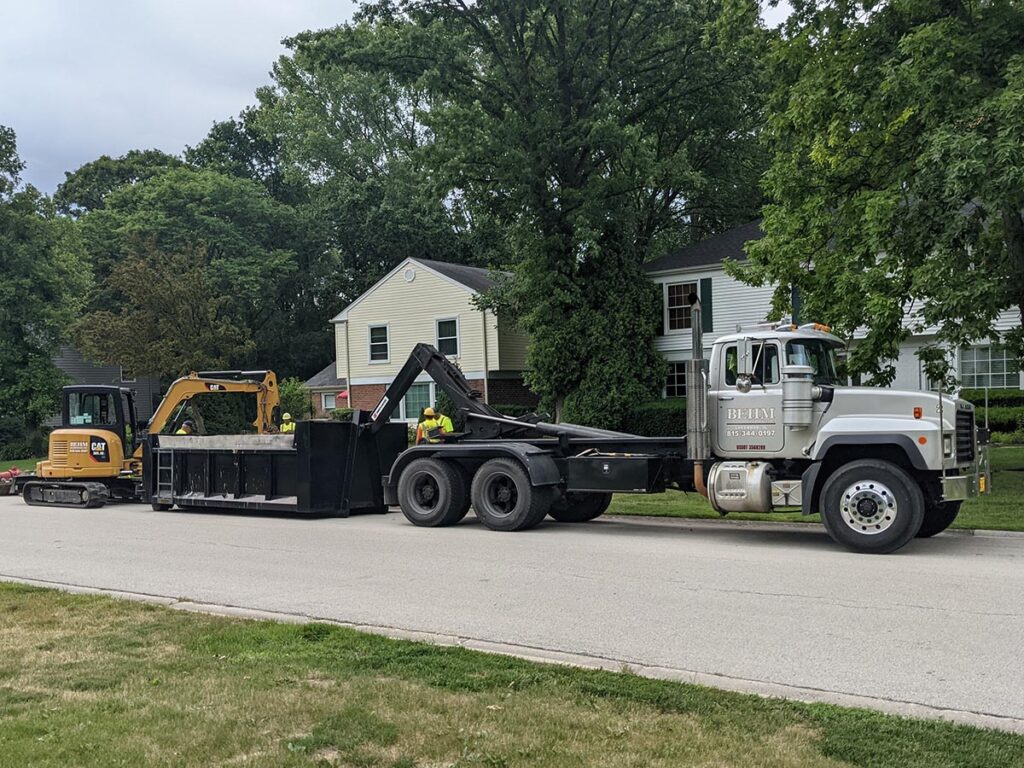 If you are experiencing frequent back-ups, recurring odors, ongoing sluggish drains, or noisy pipes, Hydro Jetting may be the best solution.

What is Hydro Jetting?

Hydro Jetting is the process of shooting highly pressurized water into the clogged lines. The first step is to perform a video inspection to see what what is going on inside. Next, we attach a specialized nozzle to the end of a flexible hose that is attached to a water tank. We feed the nozzle and hose into the pipe.

The self-propelled nozzle moves through the line, spraying water in multiple directions at extremely high-pressure—typically 2,000 PSI to 4,000 PSI, breaking up whatever is in its path, pushing it through the pipe. The high-pressure hose blasts water from the inside of the drainpipe from all angles. That means that clogs are blasted into the sewer line.

Contact Behm to see if Hydro Jetting is the best solution for your slow drain problem.

As we use water in our homes, it flows into a drain in and passes through a trap, a U-shaped pipe that holds water and prevents sewer gases from entering the home. After passing through the trap, the wastewater continues to flow downward through large drain pipes that eventually exit the home underground at one location—through a pipe called a house lateral. The house lateral usually runs out to the street from either the front or rear of your property where it connects to the public sewer system.

One of the most common causes of sewer line damage is tree roots. A tree’s roots follow sources of water as they grow. Since sewer lines carry liquid waste, roots are naturally attracted to the source.

Once in contact with a sewer pipe, tree roots begin to wrap around and break into pipes, clogging, weakening, and even breaking the structure. Clay sewer pipes, typically found in older homes, are the most susceptible to damage from tree roots.

Although pipes made of steel and cast iron are galvanized to prevent rusting, these pipes are at a high risk of corroding due to calcium and magnesium build-up from regular wear and tear. If corrosion is left untreated, it can leave the pipe susceptible to leaks and cracks.

Clogged Pipes Due to Debris and Foreign Objects

Your home’s sewage lines are only equipped to handle human waste and toilet paper. Avoid flushing trash like wrappers and paper towels, as they’re unable to properly disintegrate and can cause blockages that drain cleaning agents can’t fix. In the kitchen, cooking oil and grease can also clog pipes if they’re poured into the sink. Pour these liquids into a container, let them cool, and then dispose of them in a trash can.

During extreme temperature and cold weather, frozen pipes can bust as a result of the expanding ice. However, it’s not just cold weather that can cause pipes to rupture—though unlikely, extreme heat can burst pipes, too.

Do you have slow drains? Read more about our HYDRO JETTING SERVICES

It is important to recognize the signs of a damaged sewer system so that you can take immediate action and contact an experienced service technician.

Hidden leaks not only have the potential to run up your water bill and cause significant property damage; they can also lead to dangerous health problems. For all these reasons, it’s good to identify and repair leaks as quickly as possible, especially when it comes to sewer pipes.

A yard that’s flooded can be a sign of a broken sewer pipe. Sewer lines can be buried anywhere between a couple of feet to six feet below the ground, with colder climates calling for deeper pipes. For sewer lines close to the surface, a broken pipe can quickly begin to pool water which seeps through the grass and becomes visible on the surface. You may be able to smell the sewage before it surfaces, as sewage gas can seep through your yard’s soil.

While some blockages are caused by a pipe leading directly from a faucet or shower, you can detect a blockage in the main sewage line if multiple draining areas in the home are clogging. Toilets can warn of severe blockages if strange gurgling sounds occur when air gets pushed back up the line.

Water Damage in the Home

Water damage can occur if a drain line leaks or breaks in the home. One of the first signs is mold spreading on the floors or walls. This could point to a broken sewer line within the home, in which case you should get professional help immediately.

On that note, an unusual increase in insect and rodent activity can be a sign that you have a broken sewer line. Rodents make their homes in sewers and can squeeze through the smallest cracks to find their way into your home. The same can be said for insects that can wriggle through a cracked drain pipe and breed in the stagnant water, allowing them to multiply rapidly. Both rodents and insects can cause health issues and need to be dealt with along with the sewer line breakage itself.

Buildings will often develop cracks in the concrete slab and supporting walls as they settle and the ground shifts beneath them. However, if your home is developing new cracks it may be because you have a broken sewer line that is washing away the soil supporting the foundation. If the crack is caused by a leak, the situation is unlikely to improve over time. More water will continue to wash away the surrounding soil until the foundation can no longer support the weight of the structure above. In a worst-case scenario, the house itself may collapse. A thorough inspection can determine if you have a sewer line breakage or another issue that is causing your home or business to develop cracks.

What do I do if I see any of these signs?

Sewer line replacement is typically not included in a standard home insurance policy. However, most homeowners insurance companies offer an endorsement that you can add to your standard policy that will cover damages associated with sewage back up (but not physical damage). The endorsement usually costs an extra $40 to $50 per year according to the Insurance Information Institute, and gets you an extra $10,000 of coverage should your sewer back up.

A sewage back up can destroy your entire home. The best thing we recommend is to prevent a sewage line back up in the first place.

Have a Question or Need a Quote? We can help!